You’ve probably seen them in the airport, or perhaps at your local bank or hospital, while buying a jumper at a shop, or even at a football game: four plastic faces with expressions ranging from smiley to cross, like a children’s toy, that beg you to push them. Sometimes you do press one – it only takes a second or so – the bright green delighted one, maybe, or the paler-green happy one, the light red sad face, or, worst of all, the dark-red, distressed one.

Over the past decade these Smiley Terminals, as they are known, have become ubiquitous. They are the invention of a Finnish company, HappyOrNot, which has sold more than 30,000 of them in 135 countries. Each one weighs 1kg, has four years of battery life and can be assembled in just two minutes. Soon every terminal will be fitted with an anti-microbial coating to help limit the spread of coronavirus.

At the last count, HappyOrNot’s devices had collected more than 1.3bn responses. Each smiley station has the same four feedback options. Depending on where a terminal is placed and which of HappyOrNot’s clients is using it, up to half of the people who pass the buttons will press one. Despite the name of the company, the terminals aren’t really checking how happy you, or anyone else, is. They’re monitoring your satisfaction: smiley or frowning faces are an instantly understandable metric to rate a service, place or person at a given moment in time.

Over the past decade HappyOrNot has found that asking you to rate the service you’re given does more than tell companies what people think: it changes how staff members act and therefore how customers feel about their interactions with them. Heathrow, one of the busiest airports in the world, is a good example. In the summer of 2012 an employee from Heathrow called the Finnish company ahead of the London Olympics, seeking help for some “operational improvements”. Nine Smiley Terminals were installed for a two-month trial. The terminals immediately changed the behaviour of the airport’s security guards.

Until then, not only did some security guards avoid making eye contact with passengers, they even intimidated them as they went through passport control. Now they began cracking jokes, smiling and giving high fives to passengers. “They wanted to be the best when they talked to people,” says Ville Levaniemi, co-founder of HappyOrNot. “It was almost magic…A miracle.” Two days after the terminals were installed at Heathrow, the Finnish firm got another call: “The guy said, ‘Send more of these, we need lots of these’.”

HappyOrNot is based in Tampere, the second-largest city in Finland, with four giant plastic faces stuck on its head office. A screen almost as tall as a person hangs in the waiting area: when I visit, it reports that HappyOrNot’s employees are 75% “happy” today.

There is a terminal by the lift in the lobby and one in every meeting room. In the main office, a large collage of pictures from parties takes up an entire wall (for one of these, the company commissioned a cake that looked like one of its plastic terminals).

Levaniemi, an affable man who wears a black HappyOrNot hoodie and walks around the office in his socks, greets me with a warm smile in the firm’s sunny conference room, which is filled with awards. (I politely press the bright green button by the door after our interview.)

The Smiley Terminals were the brainchild of Heikki Väänänen, who later founded HappyOrNot with Levaniemi. Väänänen remembers a shop assistant at a computer store being deliberately rude to him when he was a teenager, and wishing that he could have reported the situation without the staff member knowing. Some 15 years later, Väänänen was running a mobile-gaming company and wanted his employees to be able to express their views to him anonymously. The terminals – and company – were born in 2009. They started as a way for employees to give feedback, but sales really took off when the firm started marketing the terminals as tools for customer satisfaction instead. 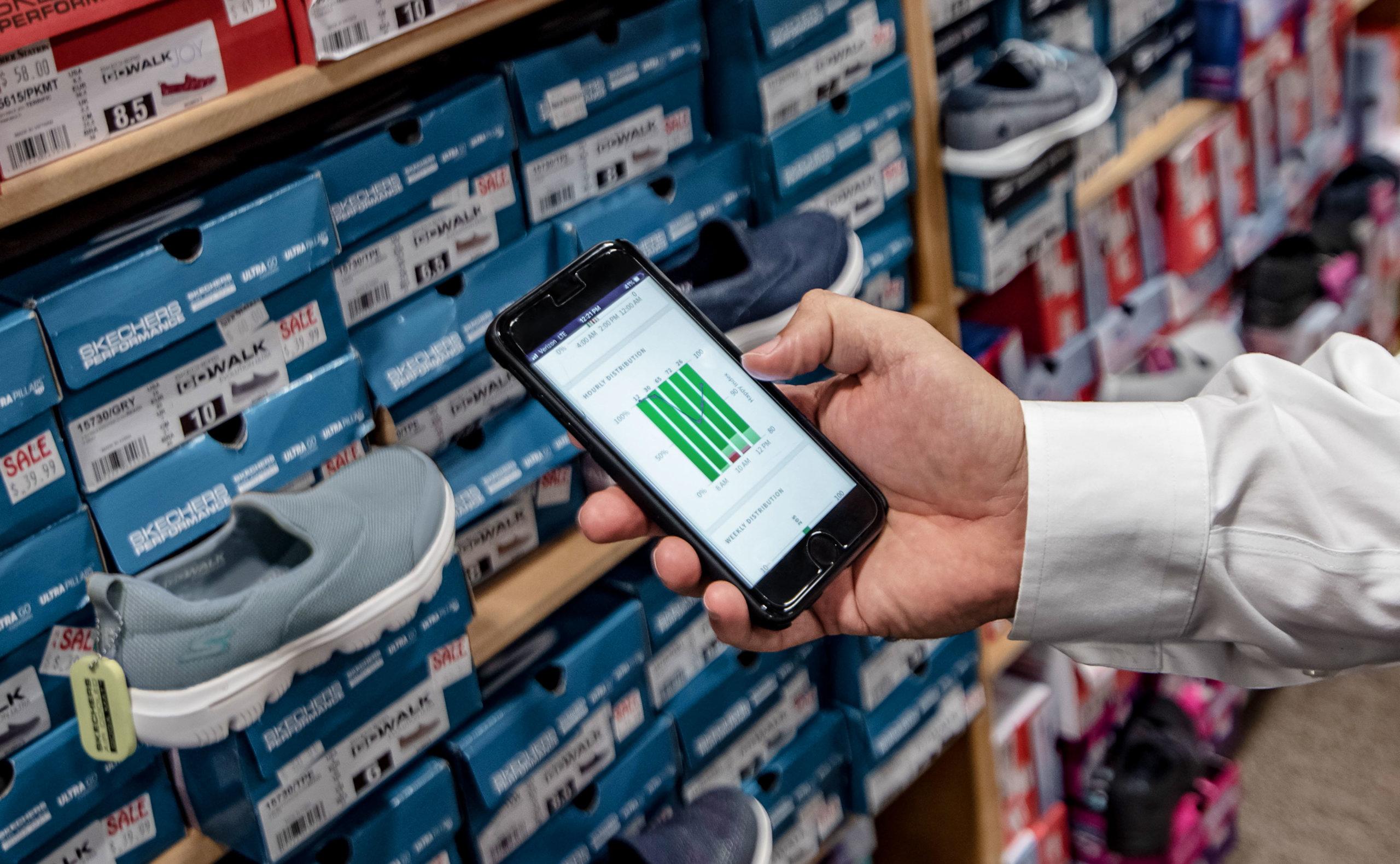 HappyOrNot Smiley Touch at Shoe Station Inc.The trove of data the firm has collected about real-life interactions is now a sought-after commodity. The company has a roster of 4,000 clients from IKEA to Shoe Station, and the firm provides them with a “Happy Index”: a figure for the “happiness” of their customers on a given day at a given time.

Through the vast bank of data, HappyOrNot has uncovered some peculiar quirks. The happiest day of the week is Thursday, for example. Perversely, the saddest month is July. The pressing of a button may seem like blunt analysis, but many companies have determined useful insights. Concerns that seem small or insignificant can make people “unhappy”. Nordea, a Finnish bank, found that customers at one of its branches expressed greater contentment after a second entrance was opened to the bank, a mere ten metres away from the first. They expressed greatest “sadness” on Monday mornings because branches were busier after the weekend, so extra staff were put on shift at that time. Queuing suddenly became more bearable.

The speed, anonymity and simplicity of the feedback means that firms can collect large swathes of data fast. Angela Hughes compiles patient feedback for the Cardiff & Vale University Health Board, an NHS organisation that oversees 17 health facilities serving nearly half a million people. Few of them tended to fill in online surveys or volunteer to be interviewed. Now, with minimal effort, Hughes can get 250 responses from a single accident-and-emergency department in just one day. 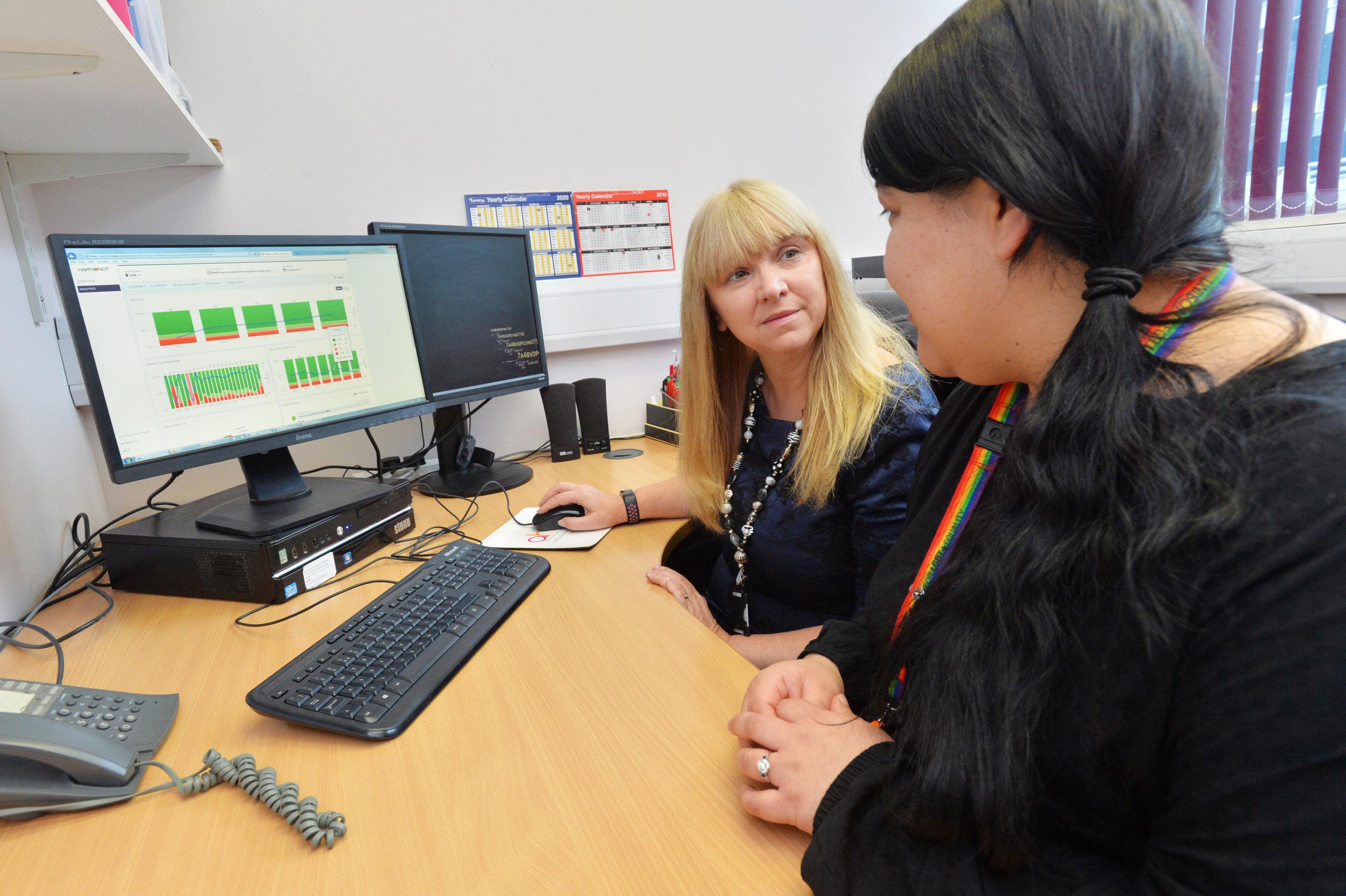 This extra data reveals unusual patterns. “We could start to identify what days of the week, what times, were raising issues,” she says. When a dental practice saw its Happy Index drop on a particular day of the week, Hughes discovered that this was when the dentist did tooth extractions. Unable to stop pulling teeth, the practice instead asked a receptionist to sit in the waiting room and talk with patients to put them at ease.

The terminals can improve happiness in real time, too. The San Francisco 49ers, an American football team, asked HappyOrNot to send staff at its stadium alerts if a number of red buttons are pressed in a row. “So it pops up – restroom D89, near the gates, something’s gone wrong,” says Sami Hero, chief executive of HappyOrNot. “And then somebody can pick it up and acknowledge [in the app] they’re taking it, so they can see they’ve run out of toilet paper or whatever.”

Some clients use the terminals to test how customers will react if something is changed. Dublin airport saw an immediate increase in passenger happiness after painting walkways with clouds, inspirational quotes and funny sayings uttered by Irish mothers. The company also hopes that it can use artificial intelligence on data already collected at terminals to help firms plan for the future: “We can say to clients, ‘Look, tomorrow you’re probably going to have a problem between 10am and 12pm, pay attention,’” says Hero. 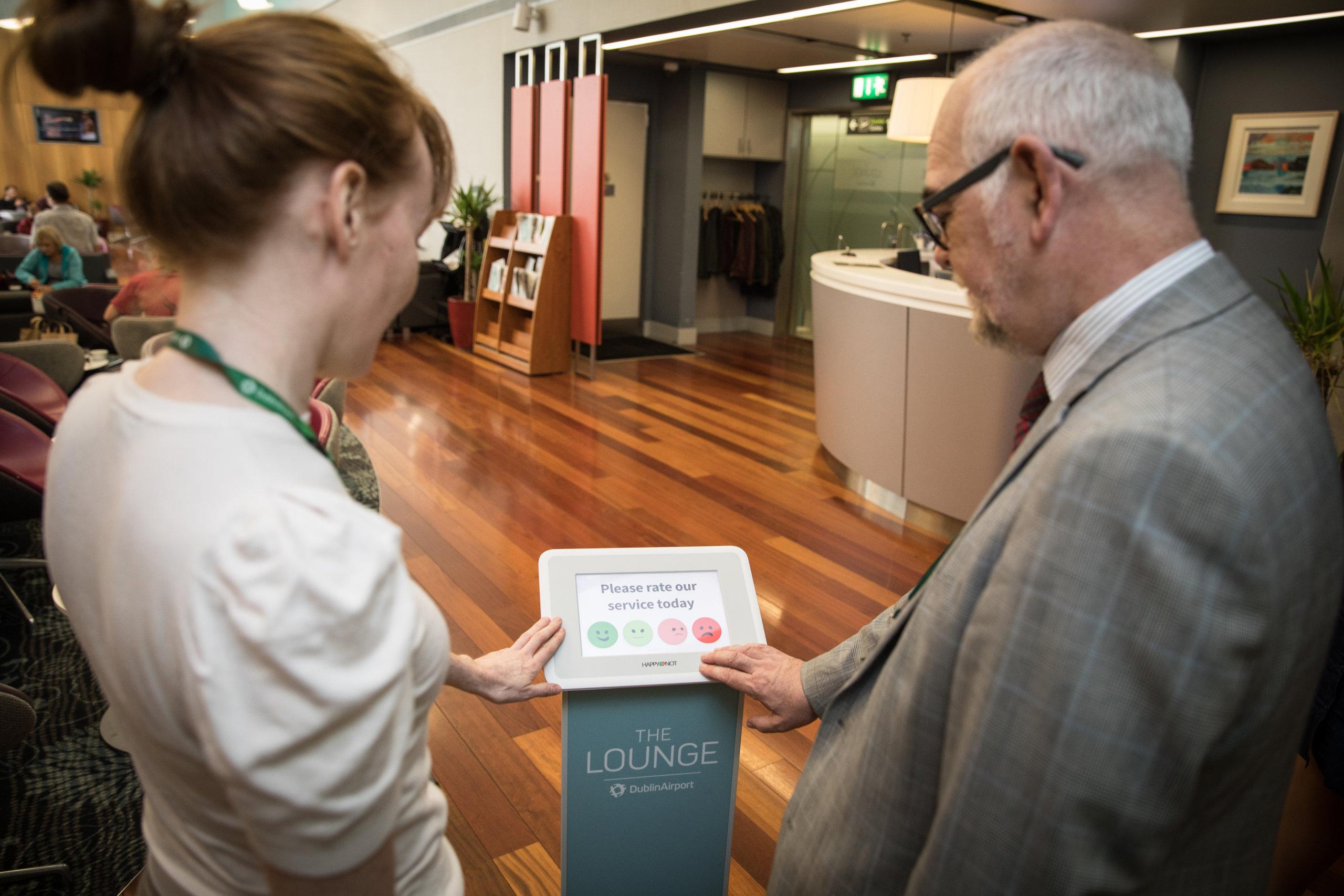 Yet smiley faces have their limits: it isn’t always possible to pinpoint why a customer is “unhappy”. The terminals have four faces, yet most online surveys have a fifth, a “neither agree nor disagree” box, because when there are fewer than five options to choose from, the resulting feedback becomes less accurate. Why don’t the terminals include a button in the middle? “The middle option has no data value for the company,” argues Kirsti Laasio, HappyOrNot’s chief customer experience officer. She reckons that people rarely feel nothing, no matter how minor a customer service interaction.

Here is what we know people do feel, according to over a billion pieces of data collected by toy-like terminals scattered around the world. On average 70% of people report being very happy with a situation and only 11% say they are very unhappy. Hospitals are 8% happier than airports. We are most likely to be disgruntled on a Sunday, and Halloween brings more people contentment than Easter Sunday. The unhappiest day on record is August 27th 2012. We don’t really know why: there was no freak weather and no big historical event (beyond Macklemore & Ryan Lewis releasing their single “Thrift Shop”).

Mostly, our Happy Index floats between 70-90%: we are a surprisingly satisfied global population. Or at least a surprisingly polite one, keener to press an exuberant green face than a slightly less happy pale one. Whatever the technology you have available, however, you can’t satisfy everyone all of the time. A catering company from Finland found that when children were served healthy food rather than burgers for their school lunches, the kids tended to press a red face on principle.

Enjoy what you’ve read? Make sure to check out the linked Customer Stories to learn more about their achievements. Or, why not check out these recommended reads?