“Between August 2018, when the tablets were installed, and March 2019, Shoe Station customers logged 111,000 feedbacks. That is phenomenal. That is learning our customer.”

The Smileys have helped Shoe Station to: 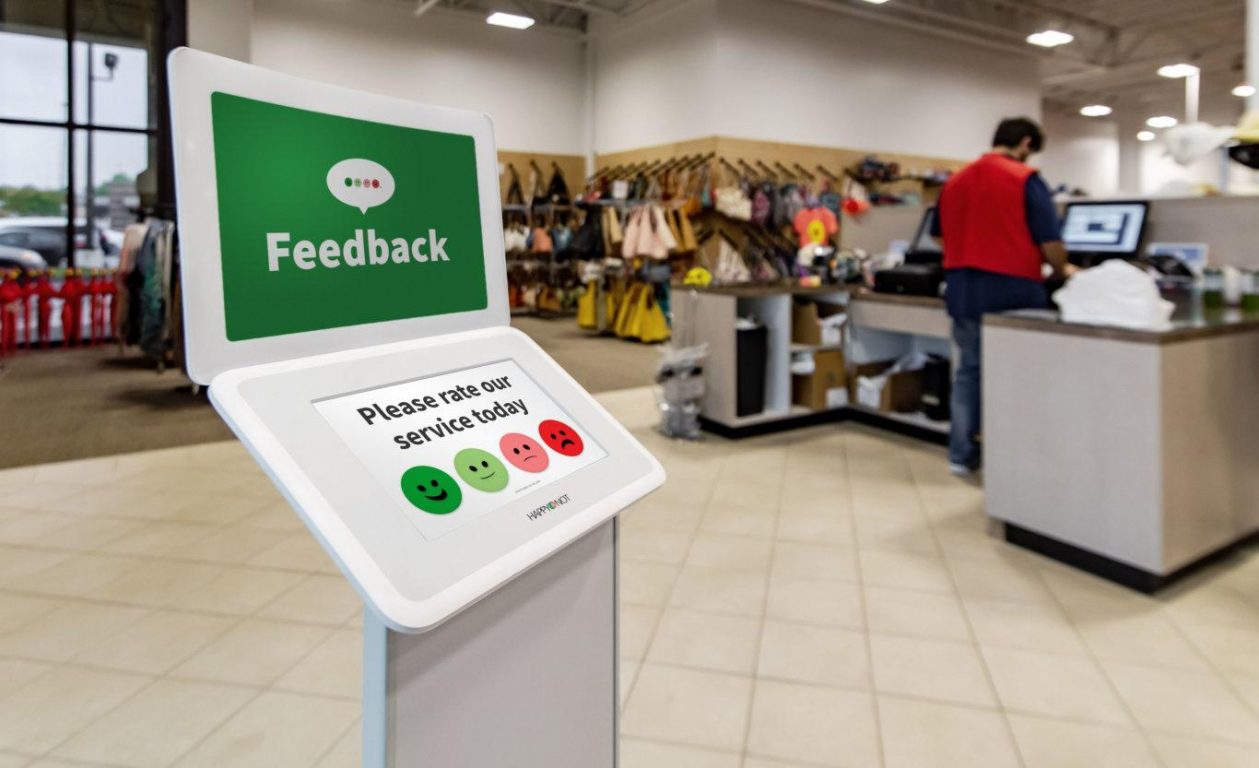 Abundance of Real-Time Feedback Put to Work in Real Time

In a few short months Shoe Station has collected 111,000 customer feedbacks, exceeding their wildest expectations. Management uses the data to spot, investigate and remedy any signs of customer dissatisfaction. The founder is still president of the company and combs through the data every Monday. He shares insights and ideas with store managers, fueling a continual feedback and improvement loop.

Randy Lambert, Director of Stores for Shoe Station, Inc., was curious about a Smiley Terminal he spotted in the Atlanta Airport. “I wasn’t sure what it was at first but quickly figured it out. It’s pretty simple. I took a picture and when I got back to the office I showed it to our president and founder, Terry Barkin. He agreed to try Smiley Touches (the tablet version of the classic Smiley Terminal which offers additional data insights) in five stores, a mix of good performers, middle performers and stores that needed improvement. Two weeks later the company added Smiley Touches in all 21 of their stores. “The results were amazing,” Randy said. “We had thousands of inputs pouring in from customers each week.”

Randy wasn’t sure whether store general managers would embrace the technology. Would they see it as just another way for customers to complain? Or for the company to tell them what they were doing wrong? But they kept an open mind and soon saw the value.

“Now the managers enjoy seeing their overall scores and how their performance ratings gradually improve,” Randy said. “They understand that it’s a tool that really helps them understand where their issues might be at any given time.”

“I have the HappyOrNot app on my phone and I can see customer comments within seconds,” Randy said.

And the results are terrific. Since rolling the Smiley Touches into their stores, Shoe Station has improved happiness by 14%.  While it’s too early to draw a line between that and sales, Randy and HappyOrNot will be watching this carefully, but all agree the signs are good. Studies show that happy people buy more – 45% more.

Shoe Station believes so much in the accuracy and value of the feedback reports that the results are used in store manager performance evaluations. Since company president embraces the system and reviews the reports every Monday, he is able to discuss with managers how they can put feedback to work. After all, what’s good for the customer is good for the manager. Now, what’s good and what is not can be quantified.

Randy knows that by capturing anonymous feedback he hears from people who would never share their experience. People typically don’t enjoy getting in someone’s face because the restroom was dirty, a line was too long, or the cashier seemed irritated. “The majority will not say anything,” he said, and if they type an email to the corporate office there is little chance they will get a reply.

Customers quickly understand the Smiley Touches and, because they are so easy to use, Randy said they tap the buttons on their way out of the store “without even breaking stride.”

“Between August 2018, when the terminals were installed, and March 2019, Shoe Station customers logged 111,000 feedbacks. That is phenomenal. That is learning our customer,” Randy said.

When Shoe Station spots a red flag on their dashboard, they are able to identify the precise time and place an unhappy episode occurred. They find corresponding store video so they can get a more detailed and accurate view of what transpired, whether it was a rude employee, a rude customer, or a long line at checkout. 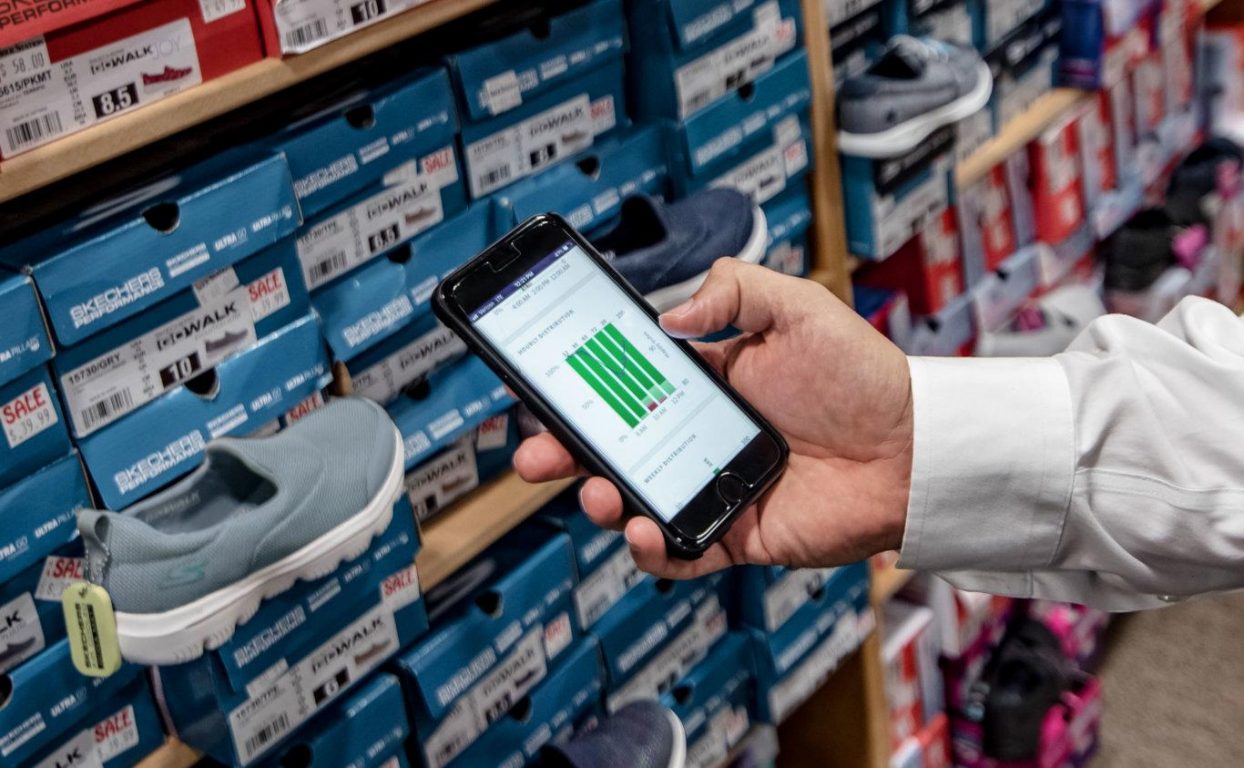 Any good executive will want to know if its investment has yield real-life change for the better. Randy shared that, in one recent instance, real-time feedback revealed a disconcerting dip in customer satisfaction. For several days in a row an otherwise good happiness quotient during the day went off a cliff at around 4pm. What was so magical about that time? After investigating the pattern, Randy said, they found that the handoff from the day crew to the night crew wasn’t a smooth one. In fact, the baton was dropped. Day workers were leaving 15 minutes early and night workers were arriving a few minutes late, leaving a store short-staffed for as much as 25-minutes during a busy period.

What made things work so well at Shoe Station? In this customer story it came down to three factors:

The Director of Sales’ commitment and belief in the system, and his engaging with managers as feedback started pouring in, has been critical to its success and effectiveness.

Because key players in the company, from the president to the store managers not only pay attention to feedback but take steps to improve lower scores injects the system into the company’s DNA.

As managers know they will be measured on customer-generated scores, they are far more certain to take steps to improve they every day. Seeing improvements in scores – especially when acknowledged by leadership – is classic positive reinforcement where it matters most.

Shoe Station is a family-owned chain founded in 1984 in Mobile, Alabama by Terry S. Barkin. It continues its commitment to the Southeast U.S., employing more than 500 individuals in the region. While ShoeStation.com does a brisk online business, Randy Lambert, Director of Stores, said the company remains committed to brick-and-mortar because of the interaction with customers and the insights the share. “We want to keep that going,” he said. Shoe Station provides almost every men’s, women’s, children’s, and athletic shoe imaginable in a wide selection of sizes and widths. And all at competitive prices. Visit www.shoestation.com to learn more.

An official HappyOrNot partner, DoublePort, LLC is a global business development and systems integration company that helps companies from Europe and Canada grow into the US and beyond. We generate direct sales, market demand and partner and channel relationships for our clients. Our team has successfully helped grow companies ranging in size from startups thru industry leaders.  Our efforts have generated millions of dollars of revenue for our clients, VC investments and corporate acquisitions.  We have helped grow SMB companies into positions of total market domination within their respective market niches. Our systems integration and product development services assist with localization and customization of our clients’ hardware and software products to meet specific customer requirements.  Our technical team includes experienced IT and Telco experts that have created and deployed complex systems around the world. Visit www.doubleport.com to learn more.

Let’s repeat this success for your business

You can read more about and agree individually to the non-essential cookie types below. We recommend accepting all as opting out may affect your browsing experience.
Essential Always Enabled
Our website needs these cookies to work properly and ensure security and privacy. The cookies do not store any personal information.
Functional
These cookies make our site more usable for you by allowing extra functions, e.g. live chat, feedback collection and sharing the content on social media. They also let us monitor site usage to measure and improve content and quality.

To communicate via the online chatbot, Drift, we require your approval for the use of your personal information such as your name and email address which you may be asked to provide as we communicate. These will be used to store your personal information so that we can pick up the conversation if we talk later. We may also send you emails to follow up on our discussion within the chatbot. We may send you marketing emails about upcoming promotions and content releases.

Marketing
These cookies are used to help make sure you are receiving the most relevant marketing messages. For example, they’re used to help show you ads based on your interests, make sure those ads are displayed properly and avoid the same ad from being shown to you repeatedly.
Save & Accept